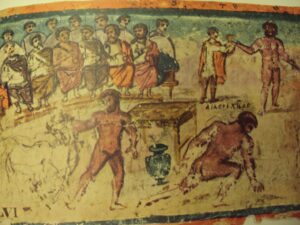 Less than a week has passed since we entered 2022 and I trust that you haven’t broken your resolutions for the New Year. Or, if you’re like me, you have yet to actually finalize them.

Fitness goals are typically on the top of Americans’ resolution lists. Online ads for dieting, the packed classrooms at the gym, folks jogging in noticeably larger numbers, are evidence of this. While it’s tempting to dismiss the pursuit of bodily fitness as vanity–it certainly is for many people–the Bible affirms the goodness of our bodies and has rejected sects like the early Gnostics, that claimed embodiment was the source of evil. Several passages by the Apostle Paul come to mind that speak to this. 1 Corinthians 6:16 reads,

Do you not know that your body is a temple of the Holy Spirit within you, whom you have from God?

In a letter to Timothy (4:4–5), the Apostle reminded the young first-century pastor that, contrary to the distorted teaching of some,

Everything created by God is good, and nothing is to be rejected, if it is received with thanksgiving, for it is made holy by the word of God and prayer.

The most well-known passage that refers to physical exercise comes from same chapter in 1 Timothy (4:8–9), “For while bodily training is of some value, godliness is of value in every way, as it holds promise for the present life and the life to come.”

It seems that Paul poses a clear hierarchy of goods. If spiritual matters are most important, little (if any) time and money should be spent on exercise. But many of us do precisely this. I don’t believe, however, on basis of the teachings of Jesus and the Apostles, and example of saints through the ages, that care for the body with the purpose of glorifying God is improper. Paul seems to assume this is natural in Ephesians 5:28–30—“no one ever hated his own body.”

But there are some unique dimensions to modern life that make us think differently about exercise. If I made a claim such as, “none of the early church fathers had gym memberships, or mentioned doing push-ups in their writings, and therefore didn’t believe it was important,” it would be a non sequitur—a conclusion that does not logically follow. The church fathers walked everywhere, were subject to the hunger associated with frequent famine, and didn’t have modern scientific knowledge of how the body works. For monastic communities in Medieval Europe, monks spent up to six hours a day laboring in fields to grow food and reclaim land. “Fitness” was indistinguishable from the work needed to survive. In earlier times, the vast majority of humans weren’t concerned with staying trim, meeting weight goals, etc.

“Postmaterialist” is a term coined by sociologist Ronald Inglehart to describe a society in which people no longer fear securing the basic necessities of life.[1] In the 21st century west, we literally create movements that mimic the bending, lifting, and running that our ancestors did by necessity. It’s remarkable to consider such exercise as a form of imitation, for this is exactly what it is.

Few Christians then or now, would claim exercise is unimportant, but we perhaps have a greater temptation to idolize fitness. The Apostle Paul assumes their benefits yet reminds us that “bodily training” (γυμνασία, gymnasia) takes second place to “godliness” (εὐσέβεια, also translated as “piety”). There are plenty of examples in our current culture where the order is reversed. Youth sports that hold practices on Sunday mornings, or in some cases the entirety of weekends, are common. In our own town, marathons are often hosted on Sunday, mid-morning. This is not an exhaustive list, but you get the point.

Strictly speaking, these events are secular, but there is reason to doubt whether this is true. “Religion” is a notoriously difficult word to define, but the practices, rhythms and language in fitness and sports-related contexts, are strikingly religious. To give perspective, in Ancient Greece, religion and athletics were closely related. Homer records “funeral games” that honor of the fallen soldier Patroclus (Iliad, book 23). These events, precursors to the Olympics, were of a religious nature. In Rome, public games combined entertainment, patriotism, and emperor worship. It is not surprising that some Christians accused, oddly enough, of “atheism,” were executed. These pagan origins are also a major reason why the Olympics were not revived until 1896.

Whatever conclusions we draw about the benefits of bodily fitness, spiritual formation—how we labor to become like Christ—matters most. But do we know what that looks like? The late professor Alan Bloom (1930–1992) observed in the mid-1980s that his students at the University of Chicago believed in an ideal physique, but lacked the vision for a spiritual/moral form. Bloom wrote,

As it now stands, students have powerful images of what a perfect body is and pursue it incessantly. But deprived of literary guidance, they no longer have an image of a perfect soul, and hence do not long to have one. They do not even imagine there is such a thing.[2]

The book of Colossians provides a vision of whom we should seek to be like and how to act accordingly. Paul writes, (3:10) “put off the old man with its practices, and put on the new man which is being renewed in knowledge after the image of its creator.”

Just as we should set aside time for physical training, so should we devote designated time to prayer, fasting, reading, etc., in order to meet spiritual goals. Unlike the muscle mass and lung capacity we may (or may not) presently have, the benefits of a soul shaped by Jesus will last, literally, for eternity.

[2]Alan Bloom, The Closing of the American Mind: How Higher Education Has Failed Democracy and Impoverished the Soul of Today’s Students (New York: Simon & Shuster, 1987), 67.