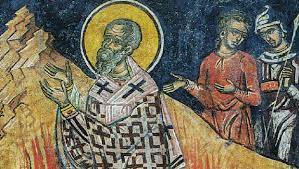 “The blood of the martyrs is the seed of the church.” Such was Tertullian of Carthage’s claim in the early 3rd century AD. Though his quote is perhaps the most famous of its kind, the African apologist was not alone in his conviction about martyrdom. The anonymous author of The Epistle to Diognetus, a letter likely composed between 150-250 AD challenges the recipient to consider how Christians are, “… thrown to wild beasts to make them deny the Lord, and yet…are not conquered?” He further comments that, “as more of them are punished, the more others increase” (7.7, 8). It is not difficult to grasp how a person who dies for their faith becomes an object of fascination, even admiration, yet few of us anticipate violent persecution—particularly at the hands of the state. Martyrdom is therefore, existentially remote.

Prior to Constantine’s edict abolishing persecution of Christians (313 AD), few believers actually died a martyr’s death. In the mid-third century two full generations passed without official government harassment. Nonetheless, literature that recounted the deaths of saints was influential and popular. Martyrs were, in the minds of many, gladiators of the faith.

Interestingly, in the Martyrdom of Polycarp, an early document that features the death of an 86-year old presbyter by burning, the narrator shows concern that acquisition of glory and fame could lead zealous Christians to intentionally pursue death. As the story goes, Polycarp chose to surrender to the authorities only after receiving divine confirmation in the form of a dream that he was appointed to die by fire. The writer is careful to note the remarkable nature of Polycarp’s case, and thus warns potential imitators. The fourth chapter briefly describes the case of a contemporary of Polycarp’s named Quintus, a Phrygian, who,

….when he saw wild beasts, turned coward. This was the man who had forced himself and some others to come forward voluntarily. The proconsul, after many appeals, finally persuaded him to swear an oath and to offer the sacrifice. For this reason, therefore, brothers and sisters, we do not praise those who hand themselves over, since the gospel does not so teach.

The case of Quintus, embedded within a narrative that praises the faith and endurance of Polycarp, shows the church’s reticence toward martyrdom. The lesson for Christians in Polycarp is to pray for the perseverance that enables one to die faithfully, while acknowledging that supernatural grace is needed for a man or woman to confess Christ under excruciating torture.

For Christianity, understanding the true and proper validity of a martyrdom depends on whether or not love is present. St. Paul wrote in 1 Corinthians 13 that if anyone surrenders his or her body to the flames, yet lacks love, they are nothing. Theologically, the very act of sacrificing one’s life provides no certainty of attaining eternal life. People have boldly given lives for reasons of pride, vanity, and glory, which at their core, are motivated to various degrees by self-love.

A recent documentary that recounts Iraqi soldiers retaking of Mosul from ISIS in 2017, features a suicide bomber’s last testament, aired on a local radio station. A young man, who is in his early teens, is set to detonate an explosive vest the following day. He expresses full confidence that martyrdom in battle assures an eternal destiny in heaven, and excoriates fellow Muslims who are not following his example. The brief clip is particularly disturbing considering that most victims in such attacks are non-combatants. And while any human who possesses such commitment grips our imagination, the above example leads to the conclusion that sacrifice is not necessarily good as sacrifice.

Returning to the ancient Roman world, St. Augustine, in a series of sermons on 1 John, addressed division within the Catholic church in North Africa during the late 4th century. In one Homily he exclaimed with great candidness,

Some Donatists, a Christian sect, were known for embracing death for the sake of the faith, and yet they accepted only churches in their region as genuine. For Augustine, their martyrdoms were devoid of love, and thus, in vain. Such conclusions are troubling because our bodily lives are the most valuable possession we can surrender.

When we come to Scripture, however, we find Jesus speaking of death, surrender, and loss of life in a sense deeper than physiology. Love requires a kind of death. This led to Thomas a Kempis’ observation in The Imitation of Christ that, “there is no love without suffering.” To believe and practice a love that patiently endures, not for hours or days, but for a lifetime is arguably harder than confessing Christ on the executioner’s rack. Fyodor Dostoyevsky, one of many writers to illustrate the near impossibility of Christian love, captured the sentiment in the freethinker, Ivan, who said, “it’s always possible to love one’s neighbor in the abstract, and even sometimes from a distance, but almost never close at hand….[.]….Admire, but not in any sense, love.”[1]

I do not wish a martyr’s death for myself or any of you, yet I recognize that obedience to Christ through love demands death, a daily death to self. This requires no small portion of the Spirit’s power. For this reason, the church father Origen of Alexandria (185-254), in penning An Exhortation to Martyrdom, encouraged a man named Ambrose to pursue, above all, “that martyrdom which is within.”