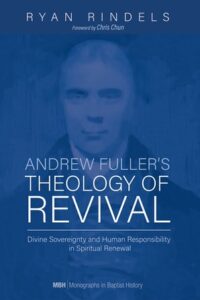 “Of making many books there is no end” (Ecclesiastes 12:12), an observation no less true in our day as in Solomon’s. But unlike the ancient world, the sheer number of potential writers and readers in 2021 is staggering. As a representative from Wipf & Stock publications noted, anywhere from several hundred thousand to one million books are published annually in the U.S. alone. Understandably, making a profit—much less a living—from writing, is reserved for an elite few. Publishers typically print the number of copies they predict will be covered by purchases, and stipulate that first-time authors like myself not receive compensation for book sales.

Andrew Fuller’s Theology of Revival is a slightly modified version of my doctoral dissertation, whose earliest stages trace back to 2015. A variety of factors determine whether a dissertation is published or not. In my case, Dr. Michael Haykin, who presided over my oral defense as an “external reader” thought my thesis would fit well into an existing book series, Monographs in Baptist History.

I include these details for several reasons. First, the book was first and foremost, a PhD thesis, intended to make a scholarly contribution to the field of religious history/historical theology. Second, the study fits within a sub-genre of writing, placing it in a “niche” market. Andrew Fuller’s Theology of Revival is not the kind of book that will make it on the New York Times best-seller list. If it does, then a spiritually powerful movement is likely upon us!

Andrew Fuller was an English pastor and self-taught theologian who lived from 1754 to 1815. Theologically a Calvinist, and denominationally, a Baptist, Fuller was born during evangelicalism’s first generation, when Charles and John Wesley, George Whitefield, and scores of lesser-known Methodist preachers were witnessing mass conversions in the British Isles and North America. Millions of Christians today trace their origins to what began in 18th century England.

The Baptist church at Soham, where Andrew Fuller was reared, was decidedly not evangelical. For a variety of minute theological reasons, the church did not actively encourage hearers to repent of their sins and trust in Jesus Christ for salvation. Nevertheless, John Eve, the congregation’s minister, communicated the gospel and Fuller was converted as a teenager. Upon discerning a gifting to preach, the church ordained him as their pastor at age 21.

Though it may seem odd for modern hearers, especially those from an evangelical background, internal anguish over one’s spiritual condition was typical in Fuller’s day and for Puritans in the preceding century. The Calvinistic doctrine of unconditional election—that from eternity God predestines men and women to salvation while passing over others—caused great consternation, particularly in a culture and context where virtually everyone claimed to be a Christian. In Fuller’s church, it was taught that a person needed what was called a “warrant”— a kind of hint, or clue that they were among God’s elect. This usually came in the form of a passage of Scripture impressed upon one’s mind.

Fuller would later repudiate this notion, arguing that the gospel itself is its own warrant. In the words of the hymn by Joseph Hart (1712-1768), the proper proclamation by the church is “Come ye sinners poor and needy.” To accept Christ without prerequisites is supported by Scripture, but so is the doctrine of election—which Fuller understood. Whereas a person like John Wesley (1703–1791) chose to reject predestination outright, Fuller sought to harmonize traditional Calvinism with evangelistic passion.

Christians who take the Bible seriously and desire to distill a coherent theology from its pages discover that God’s sovereignty extends over all creation—the destinies of human beings included. Conversely, men and women are portrayed as responsible agents who make meaningful choices willingly.

In order to explain, respectively, how divine and human wills cohere, Calvinist theologians have proposed various versions of what is called “compatibilism.” If this appears to be mere abstraction and speculation, it is neither. To give one example from the Bible, Judas is said to have willfully handed over Christ—“Now this man acquired a field with the reward of his wickedness”(Acts 1:18) and was at the same time destined to act in fulfillment of prophecy—“… the Scripture has to be fulfilled” (Acts 1:16). Similar instances are found throughout the Old and New Testaments.

If you confess the sovereignty of God in history, a rejection of compatibilism presents several theological challenges. In Martin Scorsese’s Last Temptation of Christ (1988), Judas is cast as a sympathetic figure who in effect, sacrifices his life for Jesus at God’s bidding. Judas could not do otherwise, therefore, he did no wrong. On the other hand, if all human actions are attributed to God because of his sovereignty, he is the author of sin. Betraying Jesus was evil, but God made Judas do it. On the left end of the spectrum, some theologians choose to cut the Gordian knot by rejecting the traditional attributes of omnipotence and omniscience altogether.

For obvious reasons, the above options have rightly been rejected by a majority of Christians throughout history. Believers must come to terms with tension and mystery when explaining, respectively, God’s will and our wills. The argument of my book was that Andrew Fuller understood revival in a way that could be considered “compatibilist.”

Revival is an evocative word, difficult to define with precision and yet a phenomenon that many Protestants intuitively grasp. I use “spiritual renewal” synonymously to denote a period of the Holy Spirit’s work that is more obvious, extended, and impactful than is typical in the church. There’s a well-known maxim that we know revival happened because it ended.

For a Calvinist like Andrew Fuller, genuine revival was an indisputable work of the Holy Spirit. This raised, of course, questions about human agency. Is there anything a Christian can do or should do to participate in revival? How does a man or woman pray for revival to happen? What kinds of actions should precede or accompany it?

Beginning in the early 19th century, evangelical preachers such as Charles G. Finney (1792-1875) made an anthropocentric (“human-centered”) turn in their theological understanding of revival. In his Lectures on Revival (1835) Finney claimed that “revival is not a miracle or dependent on a miracle in any sense,” but rather a “purely philosophical result of the right use of the constituted means.” Finney’s principles had major implications for pastors and evangelists on the ground. Revival was not principally, the object of one’s hopes and prayers, but something Christians did. A revival could be planned, scheduled, executed. Though prayer did not cease as an essential component, focus moved towards persuasion by technique. Finney was trained as a lawyer who spoke glowingly about the efficacy of “mental philosophy,” e.g., psychology. Many today take his understanding of revival for granted, but earlier evangelicals would have been more reticent about what outcomes accompany preaching. When asked once how many people were converted after an evangelistic tour, George Whitefield (1714-1770) quipped, “We’ll know in three years.”

As stated earlier, Andrew Fuller retained his Calvinism without falling into the errors of fatalism or quietism. He made a shift in his preaching around 1779, encouraging his unconverted hearers to turn from sin and trust in Jesus. He initiated a prayer meeting that included pastors from neighboring counties in 1784. As secretary for the Baptist Missionary Society, Fuller raised money for William Carey, the famous missionary to India, until his death in 1815.

Andrew Fuller never “hosted” a revival, yet he cultivated sermons for youth in his church who were not converted. If he did not cajole the indecisive to sit at the “anxious bench,” his messages implored men and women come to Jesus today. Fuller’s orthodox Calvinism is most conspicuous in his belief that revival may not commence if and when Christians pray, preach, and evangelize. God’s timing is not always ours. Unlike Charles Finney, who believed that failure to achieve revival stemmed from human error, Fuller recognized that matters are not that simple. In an undated sermon on revival, he asked his congregation to consider the following,

Suppose we should never live to see those days, still our labour shall not be in vain in the Lord. God would be glorified; and is this of no moment?

For any minister of the gospel, this searching question compels us to consider the cost of discipleship and our role in the advancement of God’s Kingdom. Would we continue to serve, to pray, even to weep, even for a future generation? Fuller did.