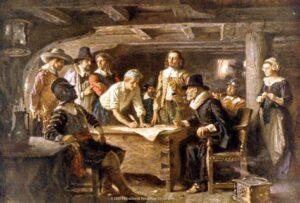 2020 marks the 400th anniversary of the Mayflower Pilgrims’ arrival at Plymouth, a significant milestone no doubt obscured by the nation’s election and COVID.  In true technocratic form, one’s appraisal of this event depends on algorithmic suggestion no less than a philosophy of history. Articles praising the Pilgrims as an embryonic community of liberty-loving patriots can be matched by scholars who decry land-grabbing enslavers who decimated New England’s native tribes and should therefore be consigned to ignominy. To take either of these options without serious qualification—though it certainly hinders a potent narrative for propaganda—is unfair and inaccurate. Whatever our inclinations, a fair and honest assessment of the settlers at Plymouth is in the end, the better course.

Two years ago, I was invited to write a chapter on the Mayflower Pilgrims in a book that has just been released, Strangers and Pilgrims on the Earth: Remembering the Mayflower Pilgrims, 1620–2020 by Hesed & Emet, a Canadian evangelical publisher. Prior to doing research, I opted to write on the subject of religious liberty. While this blog is not intended as a promotion, I am drawing insights from my chapter and if the subject is of interest, see the link above.

My doctoral dissertation focused on eighteenth century evangelicalism, not 17th century English Separatism. I knew, however, that the narratives on the extreme margins were flawed. By contemporary standards, the early 17th century was an intolerant age virtually everywhere in the world. Provincial New England’s most vocal radical was Roger Williams (1603-1683), a pastor who spent several months as a preacher in Plymouth Plantation. Williams, whose insistence that colonists should be free to worship God according to their consciences, that they were not obligated to pay taxes to a church they did not attend, and that Indians were the rightful owners of the land they inhabited got him banished to Rhode Island. From the perspective of Pilgrim leaders at the time, Williams had simply gone too far.

As for slavery and war, they were also a part of Plymouth’s history. Two major conflicts were fought, the Pequot War (1636-1638) and King Philip’s War (1675-1678). The brutality typical for the age featured scalpings, beheadings, and burnings by English and natives alike. Some Indians who were captured in war were sold as slaves. Interestingly, one African slave fought with Plymouth’s soldiers, being among the first casualties in King Philip’s War. In both engagements, white colonists aligned themselves with one or more tribes against their geographical and political rivals.

On the other hand, English colonists were not a 17th century version of the Waffen SS. When, for example, Plymouth’s colonists arrived in Massachusetts, swathes of coastal tribes had died from an epidemic of smallpox that was transmitted by interaction with English fishermen a few years before. When it was told to Plymouth’s leaders that some Englishmen with no connection to the settlers had kidnapped several Indians from a tribe—a criminal offense—and murdered others, a formal delegation personally traveled to apologize for harm done to one village on behalf of English citizens. The settlers denounced these men as wicked and unChristian.

Similarly, when a gang of young men from Plymouth stabbed an Indian in a botched robbery, all three were apprehended and brought to trial. The criminals’ protest that killing an Indian should not be a capital crime fell on deaf ears. The sentence was upheld and all three men were hanged the same day.

Though my chapter was not devoted to slavery or relations to Native Americans (except a brief section on missionary activity), I believe preliminary remarks are necessary to offset contemporary biases against figures in European colonialist history. It is of course, equally wrong to gloss injustices and atrocities committed by settlers during this period. The ability to listen and learn from history is fundamental to rightly understanding ourselves, for we are more like our ancestors than we often admit.

If the full story of the Pilgrims is neither white-supremacist genocide nor Enlightenment tolerance, what is it?

First, the colonists who landed at Plymouth were Separatists, an epithet given to English persons who had separated from the Church of England for theological reasons, notably, their rejection of bishops as overseers of their congregations. These Separatists wanted autonomy in the local church to choose their own pastors. They were, however, perceived as seditious, and prior to arriving in New England, many of the Mayflower‘s future passengers had spent close to fifteen years as exiles in Holland. King James I believed he could attain twin goals of ridding England of political pests and gaining profit through commercial fishing. For this reason, Mayflower passengers were given a charter on condition that the crown receive a return on its investment. Plymouth’s settlers accepted the king’s terms, knowing that despite the risks, they could live as Separatists in a way not possible in their native country.

There are, of course, many well-known Pilgrim myths. First, the settlers never identified themselves as “pilgrims.” The moniker is an allusion to the eleventh chapter of the book of Hebrews, and found in governor William Bradford’s History of Plymouth Plantation, published in 1651. The “First Thanksgiving” happened nearly a year after the settlers arrived, and is not even mentioned in Bradford’s History. Days of “thanksgiving” had always involved fasting. Furthermore, the pilgrims did not celebrate holidays, Christmas included.

Early conflict over the nature of religious liberty was precipitated by newfound Anglican residents who wanted to rest from work on December 25th. Governor Bradford was torn, for by appealing to “conscience,” these dissidents employed the central argument of Separatism—freedom to worship God according to one’s convictions. This humorous story was, incidentally, a harbinger of deeper disagreements. Fundamental to the existence of Plymouth Plantation was upholding a society both free and united, a commonwealth that could be built on the teachings of the Bible, but without a magisterium to adjudicate between rival interpretations of Scripture.

There were no easy answers as to whether such a society could exist. In his recent book, They Knew They Were Pilgrims, historian John Turner observes that many questions concerning religious liberty raised by the Plymouth’s Pilgrims four centuries ago are, in fact, “unresolved,” to the present day.

Plymouth’s leaders believed that a single church, established in every town and funded by compulsory taxation was the surest means of maintaining the Christian faith. In the first few decades, attending Sunday services was enforced by law. Pilgrim-like religious conformity was the very arrangement many of the Founding Fathers wanted to avoid 150 years after the Mayflower.

Ironically, the logic of Separatism meant that dissenting voices would invariably arise from within the community. Some citizens, after reading the Bible, no longer believed in infant baptism. These became Baptists. Others, concluding that a truly spiritual church had no need of any visible ordinances, renounced baptism and the Lord’s Supper. These became Quakers. Such defections were not received warmly, but to Plymouth’s credit, they never executed anyone for religious reasons.

In 1691, Plymouth Plantation was assumed into Massachusetts Bay Colony, and though its leadership never accepted religious liberty as Roger Williams had proposed, the seeds were sown that would produce a country where freedom of conscience, notably in matters of religion, would be granted constitutional protection.

Arguably, the greatest paradox of Separatist Plymouth is the belief that a unified church and state was the best means for cultivating and preserving Protestant Christianity. In fact, provincial New England, later to become the United States of America, would be a deeply religious nation filled with countless denominations. Men like William Bradford were confident that religious freedom would lead to unbelief, but to the present day, this has not been the case. Many modern European countries that have maintained the church-state union have cathedrals that are all but empty on most Sundays. By comparison, current polls show that around 40% of Americans attend church more than twice a month.

Lessons for the Present

There are valuable lessons—positive and negative—to be learned from the Pilgrims. First, liberty of conscience is an invaluable human right worth preserving at all cost, for it maintains that individual persons , worth of dignity and respect, are not mere organs of the state. Additionally, religious liberty functions as a check on tyranny in its various manifestations. As Tom Holland has argued in his sweeping history Dominion: How the Christian Revolution Remade the World (2019), Christian tradition, of which the Pilgrim’s own story forms a part, is the modern basis of human rights.

Second, preserving religious liberty in a pluralistic context is challenging. The  fact that cases concerning religious liberty are being presently heard at our nation’s highest courts is evidence that we are not above the problems faced by Plymouth’s Separatists four centuries ago. For example, individual states proscribing public gathering of worship for the sake of preserving public health is a question that hinges on the nature and scope of religious liberty,

Lastly, the substance and extent of national unity confronts our increasingly divided country. Plymouth’s attempts at tight boundaries were neither realistic, nor sustainable, and yet, commonalities did exist. For this reason, the common values that unify our own nation must coexist in tension with respect for minorities, even when voices on the margins clamor that we do otherwise. Mind you, what constitutes “respect” and who qualifies as a “minority” were, incidentally, the very questions the Mayflower Pilgrims struggled to answer.

As the old says goes, “easier said than done.”

Commenting has been turned off.